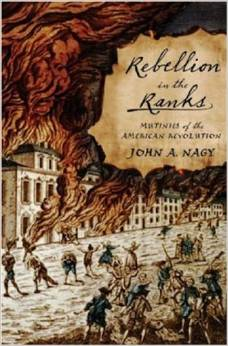 Did you know that there were numerous mutinies among the troops throughout the Revolutionary War.  Disaffection and lack of morale in an army was a greater danger than an armed enemy. You think you know all there is about the Pennsylvania Line mutiny? Did you know George Washington tried men in the French and Indian war for mutiny?

Through incredible research, John Nagy reveals tragic but engrossing events of the frequent mutinies that threatened the cause for Independence during the entire war, actions that have been overlooked in the commonly related accounts of those critical years. In his book, he corrects many of the inaccuracies of these sad events and identifies insurrections that were previously unknown. His accounts of incredible courage, hardship and defeat are often drawn from the participants themselves, their daily suffering and the perspectives of the mutineers. This work is historically important and will open your eyes to the truth about the War as you have never heard it related.”

“It gives me great pain to be obliged to solicit the attention of the honorable Congress to the state of the army…the greater part of the army is in a state not far from mutiny…I know not to whom to impute this failure, but I am of the opinion, if the evil is not immediately remedied and more punctuality observed in future, the army must absolutely break up.”—George Washington, September 1775

Mutiny has always been a threat to the integrity of armies, particularly under trying circumstances, and since Concord and Lexington, mutiny had been the Continental Army’s constant traveling companion. It was not because the soldiers lacked resolve to overturn British rule or had a lack of faith in their commanders. It was the scarcity of food—during winter months it was not uncommon for soldiers to subsist on a soup of melted snow, a few peas, and a scrap of fat—money, clothing, and proper shelter, that forced soldiers to desert or organize resistance.

Mining previously ignored British and American primary source documents and reexamining other period writings, Nagy has corrected misconceptions about known events, such as the Pennsylvania Line Mutiny, while identifying for the first time previously unknown mutinies. Covering both the Army and the Navy, Nagy relates American officers’ constant struggle to keep up the morale of their troops, while highlighting British efforts to exploit this potentially fatal flaw.

John A. Nagy is a Scholar in Residence at Saint Francis University, Loretto, Pennsylvania, a consultant for Colonial Williamsburg and the William L. Clements Library of the University of Michigan on espionage, and an expert in antique documents. He is a founder and past President of the American Revolution Round Table of Philadelphia. He graduated from Saint Francis University, Loretto, Pennsylvania (BA) in 1968 and Stevens Institute of Technology, Hoboken, New Jersey (MMS) in 1979.  John is also a fellow at Colonial Williamsburg, and Monticello, the home of Thomas Jefferson.

For more information on John A Nagy, please visit his website:  http://www.johnanagy.com/