The Gravesite and the 1817 Monument

Taken from The Battle of Paoli by Thomas J. McGuire 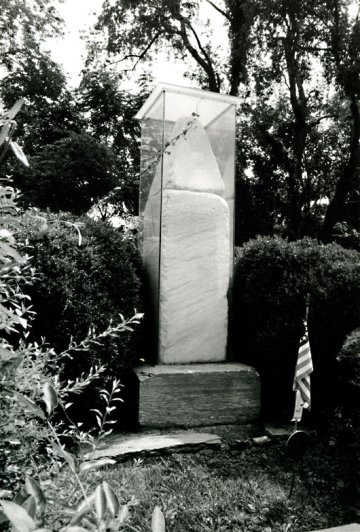 In the damp early-morning mist in the Great Valley on September 21, a Willistown farmer named Joseph Cox cautiously made his way across rain-soaked meadows and through dank woods to his neighbor’s farm … In the fields of Ezekiel Bowen and Cromwell Pearce, the site of the Paoli Camp, crimson streaks stained the soil around the still, cold figures of what remained of the dead … The broken fences, the mutilated corpses, the haze and stains and smells of death marked the scene of battle and places of massacre.

The “52 brave fellows” who were “bury’d … next day in the field of Battle” were gathered in a central location on the Bowen-Pearce property line, the scene of some of the fiercest fighting, and interred in a trench about 12 by 60 feet. The soldiers were place in two rows of twenty-six … The burial was done with great care …

On July 4, 1817 … another generation of veterans, who had clashed with the “old foe” during the War of 1812, met and resolved to take responsibility for a neglected gravesite in Chester County … [by] the Pearce family farm, the boyhood home of Col. Cromwell Pearce, the heroic commander … in the War of 1812 … [and other] distinguished comrade-in-arms … Maj. Isaac Bernard … [and] Congressman and militia surgeon William Darlington … for they wanted to dedicate the memorial on September 2o, the 40th anniversary of the battle. They consulted with local Revolutionary War veterans to get their views on how the grave should be marked, the veterans approved the placing of a marble monument similar to the monument over Anthony Wayne’s remains at St. David’s Church … [Major Barnard] located a simple classical monument of white marble, consisting of a pyramid mounted on a pedestal, resting on a plinth of Pennsylvania blue marble “about 8.ft 4 or 5 In” … The monument was “finished under the direction of the celebrated [William] Strickland,” the prominent neoclassical and Greek Revival Architect of Philadelphia … A group effort was required … so the Republican Artillerists pitched in and finished a stone and lime wall enclosure 65 feet long, 20 feet wide, and about 4 feet height, with a gate in the middle of the western wall.

The dedication ceremonies were held on September 20, 1817. At 10 A.M. at Paoli Tavern, the Republican Artillerists mustered over 400 soldiers from several local militia regiments … Revolutionary veterans … marched in the procession … a solemn military procession and headed over the Lancaster Turnpike … past the site of Picket 1 and down the hill to … where Randolph’s Picket 4 had received the first shock of battle and where the first blood had been shed. They proceeded past the blacksmith shop … Warren Tavern … to Sugartown Road … up the long hill, turned left near the spot where a disabled cannon had blocked Wayne’s escape route, and marched on to the gravesite.

The local press said there was a great crowd, “The very trees were animated by the adventurous boys, who had ascended them to witness the ceremonies. The old were there, telling the young ‘the tales of other times.’ … The guests of honor included Isaac Wayne, the general’s son, and the eighty-two-year-old Reverend David Jones, former chaplain of Wayne’s 1st Pennsylvania Brigade.

Maj. Isaac Barnard delivered the formal address [and] gave a brief but animated account of the … battle itself, and condemned “the indiscriminate and dreadful Carnage … which will forever stain the character of the British arms and consign to eternal infamy the name of Grey and his Midnight assassins.” Then Major Barnard reminded his listeners [that] “these men who fell far from their homes and their friends were deposited in one Common grave in this retired & sequestered spot and here we raise this Monument as a standing record of our gratitude for their services & respect for their Memories — to honor those who have nobly fallen to obtain the liberty and blessings which we now enjoy…”

The pedestal was inscribed on all four sides with words composed by Dr. William Darlington. The front inscription on the west side reads:

“Sacred to the Memory of the Patriots who on this Spot fell a Sacrifice to British Barbarity during the Struggle for American Independence on the Night of the 20th of September 1777.”