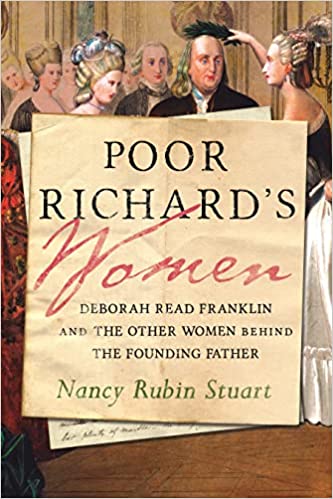 Poor Richard’s Women: Deborah Read Franklin and the Other Women Behind the Founding Father

A vivid portrait of the women who loved, nurtured, and defended America’s famous scientist and founding father. Everyone knows Benjamin Franklin—the thrifty inventor-statesman of the Revolutionary era—but not about his love life. Poor Richard’s Women reveals the long-neglected voices of the women Ben loved and lost during his lifelong struggle between passion and prudence. The most prominent among them was Deborah Read Franklin, his common-law wife and partner for forty-four years. Long dismissed by historians, she was an independent, politically savvy woman and devoted wife who raised their children, managed his finances, and fought off angry mobs at gunpoint while he traipsed about England.

Weaving detailed historical research with emotional intensity and personal testimony, Nancy Rubin Stuart traces Deborah’s life and those of Ben’s other romantic attachments through their personal correspondence. We are introduced to Margaret Stevenson, the widowed landlady who managed Ben’s life in London; Catherine Ray, the twenty-three-year-old New Englander with whom he traveled overnight and later exchanged passionate letters; Madame Brillon, the beautiful French musician who flirted shamelessly with him, and the witty Madame Helvetius, who befriended the philosophies of pre-Revolutionary France and brought Ben to his knees.

What emerges from Stuart’s pen is a colorful and poignant portrait of women in the age of revolution. Set two centuries before the rise of feminism, Poor Richard’s Women depicts the feisty, often-forgotten women dear to Ben’s heart who, despite obstacles, achieved an independence rarely enjoyed by their peers in that era.

Nancy has been writing since she was nine years old. An award-winning author/journalist she specializes in social history, social trends and women’s history. Long before today’s War On Women her books highlighted the lives of important, but often forgotten women.

Nancy’s eighth nonfiction book, “Poor Richard’s Women” will be published in February 2022. This ground-breaking book traces the little-known stories of the women Benjamin Franklin loved and lost throughout his life. Early reviews have been positive. Publisher’s Weekly described it as a ‘fresh perspective” on Franklin and predicted “history buffs will be fascinated.” Kirkus called it ”a revealing document about early American history.”

Nancy’s earlier book “Defiant Brides: The Untold Story of Two Revolutionary-Eva Women and the Radical Men They Married” was a selection of the Book-of-the-Month Club-2, the History Book Club and the Military Book Club. Other acclaimed books include The Muse of the Revolution:” “The Reluctant Spiritualist”, “American Empress;” “Isabella of Castile;” “The Mother Mirror” and “The New Suburban Woman.” (The last four on this list appeared under her previous pen name, Nancy Rubin).

Nancy has appeared on national television, been interviewed on national radio, including NPR’s “Morning Edition.” She often speaks before live audiences and book clubs, and more recently on podcasts and Zoom.