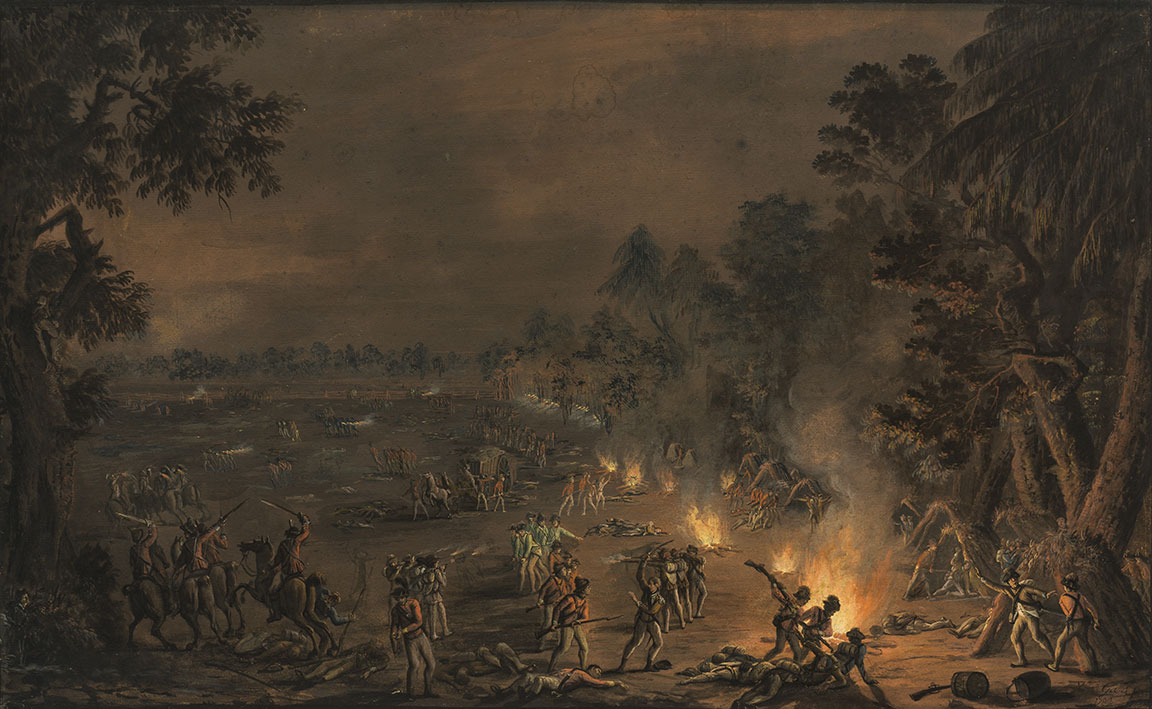 Join us on Tuesday, November 26, 2019 for a Revolutionary Lecture Series

Gather at the historic General Warren Inne near Paoli Battlefield to hear the story of Richard St. George, an Irish officer in the British Army and a veteran of the battle. Learn about St. George’s recollections of that violent night in September 1777 and his later head wound at the Battle of Germantown. After the Revolutionary War, St. George used art to help manage his painful memories of fighting in America. Meet St. George on the eve of revolution in Ireland in 1798 as he wrestles with the past and thinks about the future of his country. This special program will feature an illustrated discussion about Richard St. George’s life by Matthew Skic and a theatrical performance written by Philadelphia playwright Chris Braak with Patrick Poole as Richard St. George.

This program is being delivered in conjunction with the Museum of the American Revolution’s newest special exhibition Cost of Revolution: The Life and Death of an Irish Soldier, that is currently open through March 17, 2020. The special exhibition follows the untold story of Richard St. George, whose personal trauma and untimely death provides a window into the entangled histories of the American Revolution of 1776 and the Irish Revolution of 1798.

Matthew Skic is Associate Curator at the Museum of the American Revolution and the lead curator of Cost of Revolution: The Life and Death of an Irish Soldier. He is a graduate of the Winterthur Program in American Material Culture.

Patrick Poole has worked as an educator for the Museum of the American Revolution since February of 2019. He received his MFA from the University of Houston Professional Actor Training Program, and he has worked as a performer on stage as well as a voice actor for anime. Some of his favorite roles include Antony (Julius Caesar – American Shakespeare Center), Mr. Marks (Intimate Apparel – Cape Fear Regional Theatre), and Cygnus Magnus (Knights of the Zodiac – Netflix).

ABOUT THE MUSEUM OF THE AMERICAN REVOLUTION

The Museum of the American Revolution explores the dramatic, surprising story of the American Revolution through its unmatched collection of Revolutionary-era weapons, personal items, documents, and works of art. Immersive galleries, powerful theater experiences, and digital touchscreens bring to life the diverse array of people who created a new nation against incredible odds. Visitors gain a deeper appreciation for how this nation came to be and feel inspired to consider their role in the ongoing promise of the American Revolution. Located just steps away from Independence Hall, the Museum serves as a portal to the region’s many Revolutionary sites, sparking interest, providing context, and encouraging exploration. The Museum, which opened on April 19, 2017, is a private, non-profit, and non-partisan organization.