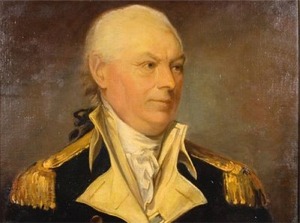 Did you know that without a ship during the winter of 1776-77, the ever resourceful John Barry lead a battery of naval artillery at the battle of Princeton?  Join us on Monday, February 13th as we find out more about the man regarded as “the Father of the American Navy” and proudly welcome noted author Tim McGrath as he presents his talk on his award winning book John Barry: An American Hero in the Age of Sail.
The Naval Order of the United States has announced that Give Me a Fast Ship has won the 2016 Samuel Eliot Morison Award for Naval Literature. Give Me a Fast Ship has won the Commodore Barry Book Award for Maritime Literature, presented by the Navy League of the United States, New York Council. McGrath is the first author to win this honor twice.  Give Me a Fast Ship won the Marion Brewington Award for Naval Literature (sponsored by the Maryland Historical Society), the Military Order of St. Louis,.  It has also won the American Revolution Round Table of New York Book of the Year Award, and the 2010 Book of the Year at the American Revolution Round Table of Philadelphia.

The man regarded as “the Father of the American Navy” returns to the quarterdeck in John Barry: An American Hero in the Age of Sail, the first comprehensive biography of this legendary officer in generations. Son of a hardscrabble Irish farmer from County Wexford, Barry was sent to sea as a child, arriving in Philadelphia during the restless decade before the American Revolution. Brave and ambitious, he ascended the ratlines to become a successful merchant captain at a young age, commanding the most prestigious ship in the colonies and recording the fastest known day of sail in the century.

Volunteering to fight for the Continental cause, Barry saw his star rise during the War for Independence. As captain of the Lexington, Raleigh, and Alliance, Barry faced down broadsides, mutinies, and even a fleet of icebergs. He captured the first enemy warship taken by a Continental vessel and fought the last battle of the American Revolution. His hard-won victory over two British warships simultaneously garnered him international notoriety, while his skill as a seafarer and cool temper established Barry as a worthy foe among British captains. Without a ship during the winter of 1776-77, the ever resourceful Barry lead a battery of naval artillery at the battle of Princeton. With peace came a historic voyage to China, where Barry helped open trade with that reclusive empire. In 1794, President Washington named Barry as the first commissioned officer in the new United States Navy. Given the title of commodore, Barry ended his career during America’s naval war with France, teaching the ropes to a new generation of officers, most notably Stephen Decatur.

Drawn from primary source documents from around the world, John Barry: An American Hero in the Age of Sail by Tim McGrath brings the story of this self-made American back to life in a major new biography.

Tim McGrath (BA History, Temple University ’74) is a business executive who lives outside of Philadelphia. He has served on the board of directors of Independence Seaport Museum, Fort Mifflin on the Delaware, New Courtland Elder Services, the Kearsley Retirement Community (founded by Benjamin Franklin’s physician), Philadelphia Senior Centers, and Christ Church Hospital. His many interests, including tennis, horseback riding, and sailing, are limited only by creaking knees and a fickle rotator cuff.

Over the years he has written articles on management, U.S. history, and healthcare issues for various newspapers and magazines. With his son, Ted (an award-winning freelance illustrator), he wrote Travels with the Commodore, a children’s book published for the Philadelphia Port Authority’s community reading program. Despite his terrible typing, he’s at work on a new biography on James Monroe for NAL/Penguin Books.