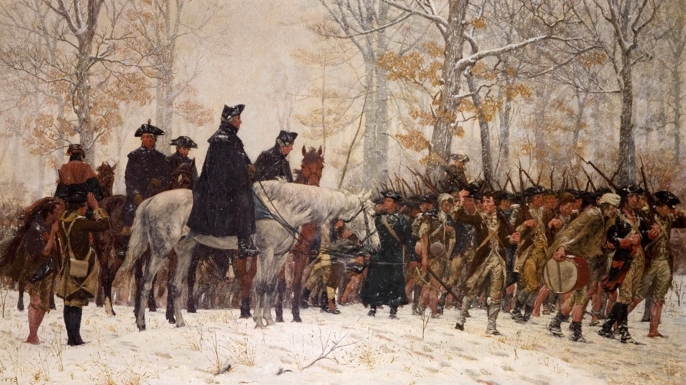 Numerical Strength of Washington’s Army During the Philadelphia Campaign

Join us on Monday, January 10th as we welcome back to our speaker series Gary Ecelbarger and Michael Harris who will be presenting a lecture on their article in the Journal of the American Revolution about the numerical strength of Washington’s Army during the Philadelphia Campaign.

For 245 years, the numerical strength of George Washington’s newly created 1777 Continental army as it entered the Philadelphia Campaign–marked by the iconic battles of Brandywine, Paoli, and Germantown–has been purely a guessing game for historians since no troop-strength returns have been known to exist between May and November of that tumultuous year. Furthermore, the number “11,000” has been universally accepted since 1850 as the march-in strength of Washington’s army when it entered Valley Forge on December 19. This acceptance has managed to muddy up an already murky situation given that Washington entered Valley Forge with 15 infantry brigades–four more than he had at the beginning of the Philadelphia Campaign four months earlier. As America approaches the 250th anniversary of this iconic period of our history, a true understanding of the military history of this campaign is impossible without knowing how many troops Washington had command of in Chester and Montgomery counties in 1777.

Historians Gary Ecelbarger and Michael C. Harris have resolved this two-century mystery of the numerical strength of the Continental army and will present their new discoveries to the Friends of Paoli Battlefield on January 10, 2022. Utilizing newly discovered returns from the fall of 1777 and analyzing an additional 30 returns related to the Valley Forge encampment, Harris and Ecelbarger will reveal fresh and fascinating facets of this period for the benefit of historians and aficionados alike. Their work has been selected for publication in the 2022 annual volume of the Journal of the American Revolution.