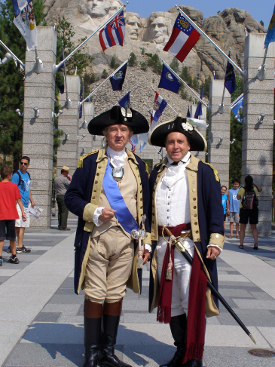 Join us on Monday, September 8th as we kick off our 4th season of A Revolutionary Lecture Series at the General Warren Inne in Malvern.  We welcome local author Gene Pisasale to discuss Washington and Lafayette, The Friendship That Saved the Revolution. General George Washington (Carl Closs) will be there in uniform for this lecture.

The lecture highlights the little known role that the Marquis de Lafayette played in America’s war for independence, including his participation at the Battle of the Brandywine on September 11, 1777. His ongoing support, both monetary and political, helped win the war against Great Britain and earns him recognition as a “Founding Son” of the Revolutionary War. The lecture series was inspired by a visit to Brandywine Battlefield Park- which along with other historic parks is in danger of being closed.

Gene has written many books including The Forgotten Star: A Historical fiction novel of the War of 1812 and true-life mysteries surrounding a 200-year old American icon- the Star-Spangled Banner, Abandoned Address- The Secret of Frick’s Lock, Lafayette’s Gold- The Lost Brandywine Treasure, Vineyard Days: a novel set in Martha’s Vineyard, and The Christian Sanderson Museum – Tom Thompson Remembers.

Gene is an historical mystery writer from the Main Line outside Philadelphia. An avid history buff, he started writing novels after 30 years in the energy and investment industry. He holds a Master’s Degree in Petroleum Geology and an MBA Finance. Gene is a member of the Chester County Historical Society, Chadds Ford Historical Society, American Friends of Lafayette, Friends of Brandywine Battlefield and is an approved speaker for the Delaware Humanities Forum. He has published five novels, conducts an ongoing lecture series on historical topics and is available for book signings. Gene and his wife Phyllis live in Kennett Square, Pennsylvania with their three cats Frankie, Francis and Momcat, parakeets Linus and Sally and occasional feline freeloaders Bear, Smoky and Dadcat.