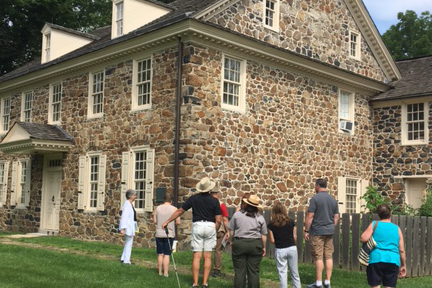 Canceled until further notice due to Covid-19

Want to learn more about locations that were important during the Revolutionary War in and around the Paoli Battlefield? Then join us for a fun and informative bus tour! This event is open to a maximum of 10 people, so make sure to reserve your seat today!

The tour will start at the Paoli Battlefield and will proceed through Paoli, showing the locations of the Picket Post and the Paoli Tavern. We will then move to Waynesborough for a one hour tour of General Wayne’s home. After Waynesborough, we will drive down into the Great Valley/Swedesford Road area and see where the British army was camped.

The tour will then follow the route General Gray’s soldiers marched on the night of the Bayonet attack. We will also do a short trip to St. Peters Church in the Great Valley to see where the British soldiers who were killed in the battle are buried. From the Church, we will proceed on the attack route, noting the locations of the Mounted Vidette that first fired on the British and who rode to warn General Wayne of the approaching troops.

Next, we will proceed south towards The Malvern Pass, with a stop at the Warren Tavern. The tour continues to the first picket post that was attacked and overrun, and will continue into the Borough, where we will then stop at the last picket that was attacked, just before the British launched the charge into Wayne’s Camp. From there, we will return to the park to do a walk about in order to get a better perspective of what it was like back in 1777.

Location:
Meet at the Paoli Battlefield

Battle of Paoli books will be available for $20 during the tour.