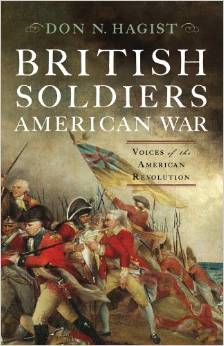 Who were the British soldiers that the Americans faced during the Revolutionary War? What of the soldiers that were at the Paoli Battlefield that fateful night of September 20th, 1777?  Were they the dregs of society, criminals, or perhaps conscripts?  What motivated them to serve in the British Army?  Join us on Monday, April 11th, 2016, as we welcome Don N. Hagist the author of British Soldiers, American War Voices of the American Revolution who will show a rare and fascinating first person profiles of soldiers who fought for the British crown, including those who fought here at Paoli.

Much has been written about the colonists who took up arms during the American Revolution and the army they created. Far less literature, however, has been devoted to their adversaries. The professional soldiers that composed the British army are seldom considered on a personal level, instead being either overlooked or inaccurately characterized as conscripts and criminals. Most of the British Redcoats sent to America in defense of their government’s policies were career soldiers who enlisted voluntarily in their late teens or early twenties. They came from all walks of British life, including those with nowhere else to turn, those aspiring to improve their social standing, and all others in between. Statistics show that most were simply hardworking men with various amounts of education who had chosen the military in preference to other occupations. Very few of these soldiers left writings from which we can learn their private motives and experiences.

British Soldiers, American War: Voices of the American Revolution is the first collection of personal narratives by British common soldiers ever assembled and published. Author Don N. Hagist has located first-hand accounts of nine soldiers who served in America in the 1770s and 1780s. In their own words we learn of the diverse population—among them a former weaver, a boy who quarelled with his family, and a man with wanderlust—who joined the army and served tirelessly and dutifully, sometimes faithfully and sometimes irresolutely, in the uniform of their nation. They were volunteers, who’d enlisted for a mix of reasons. Some were seeking economic advantage; others were just in search of adventure. Each soldier had his own hopes and fears and aspirations. “It was an all-volunteer force of people who joined the army as a profession.”

“There’s a tendency to look at historical wars strictly in terms of good guys and bad guys,” adds Hagist. “And so you assume that if America’s enemy were the bad guys, then the people fighting in the army must have been bad somehow. So we lose sight of the fact that the armies are made up of individual people and they all had lives, they all had reasons for joining the army.” The common British soldier of the American Revolution has a certain image in the popular imagination, the kind of mindless automaton you can see in movies like “The Patriot.”

That doesn’t fit Hagist’s research, which collects most of the written first-hand accounts of common soldiers from the period, together with years of archival research among military and public records. Nor does the impression of constant brutal discipline. “There were brutal punishments, but most soldiers had pretty clean records, but the most surprising thing is the simple humanity of these people, in contrast to most of the literature.”

Don’s other books are Wenches, Wives and Servant Girls: A Selection of Advertisements for Female Runaways in American Newspapers, 1770 to 1783 (2008), General Orders, Rhode Island: December 1776 – January 1778 (2009), Journal of the American Revolution by Todd Andrlik, Hugh T. Harrington and Don N. Hagist (2013), and The Revolution’s Last Men: The Soldiers Behind the Photographs (2015)

Don N. Hagist, editor of Journal of the American Revolution, is an independent researcher specializing in the demographics and material culture of the British Army in the American Revolution. He maintains a blog about British common soldiers (http://redcoat76.blogspot.com) Besides several books, he has published numerous articles on the subject. He gives lectures in America and Great Britain, and is available for speaking engagements.  Don is an engineering consultant, and also writes humor material for cartoonists whose work appears in national magazines and newspapers. He lives in Providence, Rhode Island. He can be contacted at dhagist@cox.net.