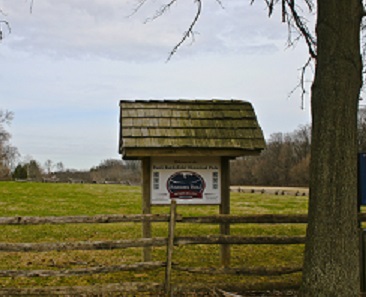 We have made progress since announcing that we had received a grant from the ABPP (American Battlefield Protection Program) in 2014 with the goal of become one of only 2500 sites nationally that bear the destination of National Historic Landmark by the National Park Service.   Please check our site regularly as we will keep this page updated on our latest status.

In its quest to become a National Historic Landmark, the Revolutionary War’s Paoli Battlefield has reached a significant milestone – why it has an exceptional and unique significance to America.  For the National Park Service, just being a battle fought for our independence is not enough to receive the highest recognition that can be conveyed by the United States.

There are six potential Criteria and meeting more than one doesn’t automatically mean a higher chance of success.  The NHL program prefers to focus on a single Criteria to demonstrate the unique and time-proven characteristic that makes a site nationally significant.  This is a practical consideration as the process involves many reviews by Park Service professionals and two separate panels of noted historians.

This hasn’t been an easy task and, in fact, it took a while to understand that there were some hidden barriers to our efforts.

The first is that when the Paoli Battlefield Preservation Fund and Chester County nominated the battlefield to be placed on the National Register of Historic Places, it was put forward at the lowest level of significance – local significance.  Why was that done in 1996?  The 43 acre property was under a direct threat of being sold to developers and historian Tom McGuire had not yet published his ground-breaking book correcting years of myth and incomplete historical reporting.  The local level of significance was the quickest and easiest case to defend in the process.  It successfully placed it in the National Register.

The other barrier was the fact that the story of the battle and its importance in the development of American values had faded in the 20th Century.  Both passage of time and changing social studies interpretations has reduced public education and awareness of the Revolutionary War.

Bottom Line: we had to decide which aspect of the Battle of Paoli and its aftermath in the American experience most clearly represents its importance to the nation as a whole…and we had to provide detailed supporting documentation.  In other words, prove that its significance has jumped from a local to a national level and locate proof of its impact over the years following the actual battle.

We are fortunate that the research team we selected is more than qualified to take on this challenge.  John Milner Associates (a Commonwealth Cultural Resources Group company) Archaeologist/Military Historian Wade Catts and Robert A. Selig, PhD lead the team.  Wade has worked on a number of Philadelphia Campaign battlefield sites and brings a wealth of experience interpreting historical records and scientific data.  Dr. Selig is an incredible, multi-lingual  researcher and scholar.  Bob was the project director of the famed Washington-Rochambeau Revolutionary Route National Historic Trail (W3R-NHT) that runs from Rhode Island to Yorktown.

So here is our focus for the National Historic Landmark nomination:

The Battle of Paoli was where British atrocities against captured and wounded American soldiers enraged both the Continental Army and citizens across the newly formed nation.  Remember Paoli! perhaps the nation’s first battle cry (research still in progress), rallied American soldiers in future battles.  And it was the password for Washington and Wayne’s mirror-image midnight, bayonets-only surprise raid that captured the British fort at Stony Point, high atop the palisades, and called the Gibralter of the Hudson River in 1779.

The “Paoli Massacre” marked a turning point in how Americans viewed the British forces.  It captured America’s growing hatred against their former colonial masters who now plundered and rampaged across three states, treating civilians as traitorous rebels. It galvanized American resistance to British rule.

The success of the storming of Stony Point energized American opinion and optimism in the same manner as Washington’s earlier successful crossing of the Delaware River and capturing Trenton.  It made Anthony Wayne and his newly formed Light Infantry (Special Forces) famous and the military operation was praised throughout the western world.

But most importantly this battle, using the same tactics of the Redcoats at Paoli, had one major difference: no atrocities were committed.  Despite suffering from a head wound that required him to be carried forward with his attacking men, Wayne ordered that all the captured soldiers and officers be treated with dignity and respect.

Congress saluted Anthony Wayne for his courage and his compassion, awarding him and his commanders with special congressional awards.  Americans and Europeans alike praised his actions and the beginning of an American ideal was formed: Americans can complete any mission – and do it righteously!

Bob Selig’s research covering the years 1777 to the 1920’s uncovered hundreds and hundreds of addresses in Congress, state assemblies, newspaper & magazine articles, speeches and prayers referring to the Battle of Paoli and Remember Paoli! These citations came from locations across the United States.  The broad usage and references undeniably shows that for well over 150 years, at any place in America, when someone said the name “Paoli” everyone knew what it meant.  They remembered the citizen-soldiers who died there, and knew that America will revenge wrongful actions while maintaining its own high ideals.

We will be refining our “statement of significance” for the National Historic Landmark and we are also preparing updates to the National Register including raising the level of significance in other Criteria, adding newly uncovered information and participating in some very exciting programs with the Pennsylvania Historic and Museum Commission and fellow Rev War sites.  But more about that in future issues!

Look for more information on this in future issues and on our website.