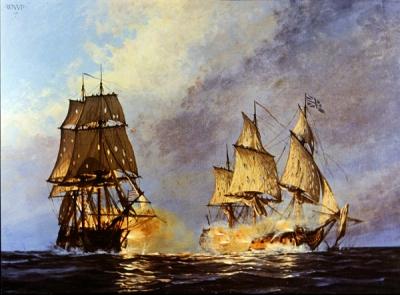 Give Me A Fast Ship

Join us on Monday, February 12th, 2018 for a Revolutionary Lecture Series

America in 1775 was on the verge of revolution — or, more likely, disastrous defeat. After the bloodshed at Lexington and Concord, England’s King George sent hundreds of ships westward to bottle up American harbors and prey on American shipping. Colonists had no force to defend their coastline and waterways until John Adams of Massachusetts proposed a bold solution: The Continental Congress should raise a navy.

Join us on Monday, February 12th, 2018 as we welcome back award winning author Tim McGrath as he presents his award winning book, Give Me a Fast Ship. 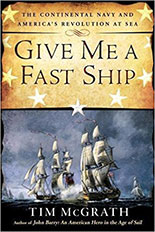 The idea was mad. The Royal Navy was the mightiest floating arsenal in history, with a seemingly endless supply of vessels. More than a hundred of these were massive “ships of the line,” bristling with up to a hundred high-powered cannon that could level a city. The British were confident that His Majesty’s warships would quickly bring the rebellious colonials to their knees.

They were wrong. Beginning with five converted merchantmen, America’s sailors became formidable warriors, matching their wits, skills, and courage against the best of the British fleet. Victories off American shores gave the patriots hope—victories led by captains such as John Barry, the fiery Irish-born giant; fearless Nicholas Biddle, who stared down an armed mutineer; and James Nicholson, the underachiever who finally redeemed himself with an inspiring display of coolness and bravery. Meanwhile, along the British coastline, daring raids by handsome, cocksure John Paul Jones and the “Dunkirk Pirate,” Gustavus Conyngham—who was captured and sentenced to hang but tunneled under his cell and escaped to fight again—sent fear throughout England. The adventures of these men and others on both sides of the struggle rival anything from Horatio Hornblower or Lucky Jack Aubrey. In the end, these rebel sailors, from the quarterdeck to the forecastle, contributed greatly to American independence.

Meticulously researched and masterfully told, Give Me a Fast Ship is a rousing, epic tale of war on the high seas—and the definitive history of the American Navy during the Revolutionary War.

The Naval Order of the United States announced that Give Me a Fast Ship won the 2016 Samuel Eliot Morison Award for Naval Literature. Also in May, 2016: The book won the Commodore Barry Book Award for Maritime Literature, presented by the Navy League of the United States, New York Council. McGrath is the first author to win this honor twice.

In 2015, Give Me a Fast Ship won the Marion Brewington Award for Naval Literature (sponsored by the Maryland Historical Society), the Military Order of St. Louis, and the American Revolution Round Table of New York Book of the Year Award.

The Navy League of the United States, New York Council, named John Barry: an American Hero in the Age of Sail, as the first recipient of the Commodore Barry Book Award for Maritime Literature. The book was also awarded the American Revolutionary War Roundtable Book of the Year for 2010, and named a finalist for the 2011 RADMR Samuel Eliot Morison for Naval Literature.

Tim McGrath (BA History, Temple University ’74) is a business executive who lives outside of Philadelphia. He has served on the board of directors of Independence Seaport Museum, Fort Mifflin on the Delaware, New Courtland Elder Services, the Kearsley Retirement Community (founded by Benjamin Franklin’s physician), Philadelphia Senior Centers, and Christ Church Hospital. His many interests, including tennis, horseback riding, and sailing, are limited only by creaking knees and a fickle rotator cuff.  Over the years he has written articles on management, U.S. history, and healthcare issues for various newspapers and magazines. With his son, Ted (an award-winning freelance illustrator), he wrote Travels with the Commodore, a children’s book published for the Philadelphia Port Authority’s community reading program. Despite his terrible typing, he’s at work on a new biography on James Monroe for NAL/Penguin Books.