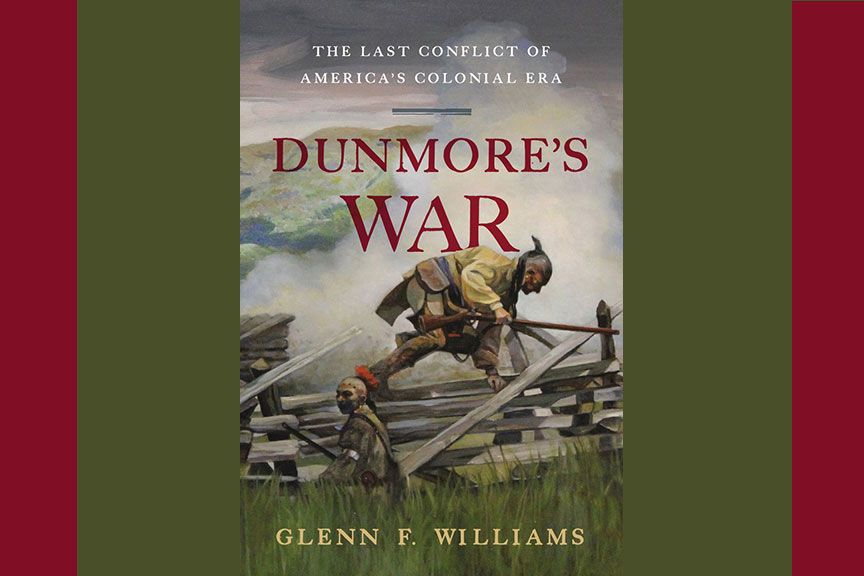 Join us on Monday, July 13, 2020 for a Revolutionary Lecture Series

Known to history as “Dunmore’s War,” the 1774 campaign against a Shawnee-led Indian confederacy in the Ohio Country marked the final time an American colonial militia took to the field in His Majesty’s service and under royal command. Led by John Murray, the fourth Earl of Dunmore and royal governor of Virginia, a force of colonials including George Rogers Clark, Daniel Morgan, Michael Cresap, Adam Stephen, and Andrew Lewis successfully drove the Indians from the territory south of the Ohio River in parts of present-day West Virginia, Ohio, and Kentucky.

This presentation explains the causes, course and conduct of the last Indian War before the start of the American War for Independence. Set during what some would call the “Quiet Time,” many historians pay it little attention or misinterpret its historical significance. However, John Murray, fourth Earl of Dunmore, the last royal governor of Virginia, led the colony’s soldiers “in his majesty’s service” in a defensive war that culminated in a successful offensive military expedition before the deepening constitutional crisis spun out of control. Although the victorious Lord Dunmore returned to Williamsburg in triumph and at the height of his popularity in December 1774, before another year ended he would flee his capital and be vilified by Virginians. At the conclusion, participants will learn that before the start of the Revolutionary War, Lord Dunmore had acted in the best interest of the colony – including in 1774, and gain a better appreciation for the organization, composition and operations of the Virginia colonial militia. The information is based on research for Lord Dunmore’s War: the Last Conflict of America’s Colonial Era (Westholme Publishing, 2017).

As an immediate result of Dunmore’s War, the frontier remained quiet for two years, giving the colonies the critical time to debate and declare independence before Britain convinced its Indian allies to resume attacks on American back country settlements. Ironically, at the same time Virginia militiamen fought the biggest battle of Dunmore’s War under command of a king’s officer, delegates to the First Continental Congress in Philadelphia decided on a united resistance to Parliament’s heavy-handed Coercive, or “Intolerable” Acts that threatened representative government in all the colonies. Before another nine months passed, Virginia became one of the leading colonies in the move toward American independence. Although he was hailed as a hero at the end of the Indian campaign, Lord Dunmore’s attempt to maintain royal authority put him in direct opposition to many of the subordinates who followed him on the frontier. Before being driven from Virginia in 1776, he notably organized the “Royal Ethiopian Regiment” composed of slaves who were promised freedom if they deserted their rebel masters and entered military service to the crown.

Join us on Monday, July 13, 2020, as we welcome Glenn F. Williams to educate us on his book on Dunmore’s War: The Last Conflict of America’s Colonial Era starting at 6pm.

Glenn F. Williams is a retired Army officer who entered public history as a second career. He is currently a Senior Historian at the U.S. Army Center of Military History, Fort McNair, DC, where his previous positions included Historian of the National Museum of the U.S. Army Project and Historian of the Army Lewis and Clark Bicentennial Commemoration. He has also served as Historian of the American Battlefield Protection Program of the National Park Service, Curator/ Historian of the USS Constellation Museum, and Assistant Curator of the Baltimore Civil War Museum – President Street Station. He is the author of several books, including Year of the Hangman: George Washington’s Campaign Against the Iroquois (Westholme), recipient of the Thomas J. Fleming Award for the Outstanding Revolutionary War Book of 2005, and named one of “The 100 Best American Revolution Books of All Time” by the Journal of the American Revolution in the spring 2017 issue.  His newest book, “Dunmore’s War: The Last Conflict of America’s Colonial Era,” was released in May 2017. In 2018 he was recognized for contributions to the study of 18th Century American military history with the Shelby Cullom Davis Award of the Society of Colonial Wars and the Judge Robert K. Woltz Award of the French and Indian War Foundation. He holds a Ph.D. in History from the University of Maryland, College Park.