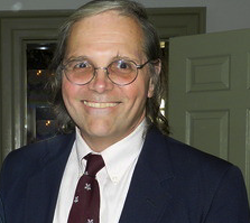 Who designed the Great Seal of the United States of America?  Who was the ONLY Secretary of the Continental Congress for it’s entire 15 years?  Who stands to the right of John Hancock on the painting of the Declaration of Independence on the 2 dollar bill?  Who’s name besides John Hancock was on the Dunlap Broadside, a copy of the Declaration of Independence printed on the night of July 4th and the only public version for the next 6 months?  Who notified George Washington of becoming our first elected President at Mount Vernon?  Charles Thomson, that’s who.

Join us on Monday, November 9th, 2015 as Bruce Gill the Executive Director and Curator of the Harriton Association, introduces us once again to this forgotten founding father.

Although few people today have heard of Charles Thomson (1729-1824), he was one of America’s most significant and influential Founding Fathers. Before the Constitution took effect in 1789, the Continental Congress was both the Executive and the Legislature. There was no President of the United States, only a President of Congress (elected by Congress). Thomson’s job combined what are now the domestic duties of the Department of State, the duties of the Secretary of the Senate. and the Clerk of the House of Representatives

As the only Secretary of the Continental Congress for its entire fifteen years, Thomson was a tremendous unifying factor. He kept the minutes of all sessions of Congress, including special minutes of all the secret affairs. His journals and files became the archives of our nation. Among his many accomplishments as Secretary, Thomson designed the Great Seal of the United States. The United States of America continues to use the Great Seal on all of its official documents, and anyone can easily locate the Great Seal on the reverse side of the one dollar bill.

As Secretary, Thomson’s name was regarded as an emblem of truth. In all the factional disputes of the Revolutionary period, his judgment was respected. During the rumors and uncertainties of the Revolutionary War, Thomson helped the Continental Congress retain the faith and support of the people by insisting that full and honest reports be issued, under his signature, concerning all battles and engagements whether won or lost.  Ranked closely to the President, Thomson stands to the right of John Hancock in the painting of the Declaration of Independence seen on the two-dollar bill. In fact, Hancock’s and Thomson’s are the only two names on the Dunlap broadside, the copy of the Declaration printed the night of July 4th – the only version made public for the next six months

Charles with his wife Hannah retired to Harriton House (which still stands today in Bryn Mawr, PA (http://www.harritonhouse.org/). Thomson originally acquired the house and estate through his marriage to Richard Harrison’s daughter, Hannah Harrison, in 1774. In 1789, after serving 15 years as the Secretary of the Continental and Confederation Congresses, Charles Thomson and his wife Hannah retired to Harriton House, where he remained until his death in 1824.

Charles Thomson pursued two major interests in his retirement at Harriton. The first was scientific agriculture, which was America’s principal ‘industry’ immediately following the Revolution. Thomson had had a long-standing interest in scientific agriculture. In 1785, while still serving as Secretary, Thomson helped to found the Philadelphia Society for Promoting Agriculture, which survives today as the oldest continuing agricultural organization in the country. He had also written a pamphlet, published by the American Philosophical Society in the same year, entitled Notes on Farming. While at Harriton, Thomson experimented with new agricultural techniques and crop production. He was also an avid beekeeper. Perhaps most importantly, Thomson was an ardent abolitionist who managed his farm with paid labor and by letting his land on shares with his workers. He had a continuing correspondence with his old friend Thomas Jefferson, and in a letter to Jefferson, Thomson argued that slavery was like a cancer on this great new country which would come to bloodshed if it could not be resolved by religion, philosophy, or reason.

Charles Thomson’s second major interest in retirement was to return to his classical studies. While at Harriton, he translated the Bible from ancient Greek texts into English. The Bible was printed in Philadelphia in 1808 by a woman printer named Jane Aitken. The four-volume work was the first translation of the Bible from Greek texts on the North American Continent.