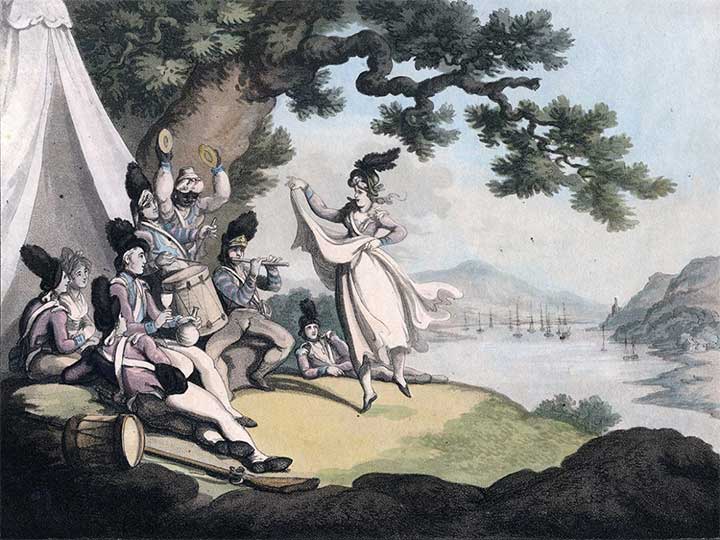 Join us on Monday, April 9th, 2018 for a Revolutionary Lecture Series

The roles of women in the armies of the American Revolution, although not unknown, are not fully appreciated. Of all that has been written on this period of history, only a small portion addresses the women who followed the armies; still less is dedicated to the topic. This shortfall is not the result of a dearth of primary accounts. There is a great deal of such material available, but very little has been compiled or assimilated. It is with a view toward compilation that this article is written.

Join us on Monday, April 9, 2018 as we welcome back noted author Don Hagist as he presents British Army Wives.

Several “classic” published profiles of women and children with the British army during the American Revolution are available, but tend to be general and sometimes heavily stereotyped. A few high quality works have appeared quite recently, but even these tend to treat the topic amid a broader study and thus provide only an overview. A much better and more detailed understanding can be obtained from the wealth of primary source material that is available. This article interweaves an assortment of such material from a large number of sources, which, when taken together, begins to yield portraits of women present within the British garrisons and encampments that clarify their characters, daily lives, responsibilities and experiences.

Don N. Hagist, editor of Journal of the American Revolution, is an independent researcher specializing in the demographics and material culture of the British Army in the American Revolution. He maintains a blog about British common soldiers and has published a number of articles in academic journals. His books include The Revolution’s Last Men: the Soldiers Behind the Photographs (Westholme Publishing, 2015), British Soldiers, American War (Westholme Publishing, 2012), A British Soldier’s Story: Roger Lamb’s Narrative of the American Revolution (Ballindalloch Press, 2004), General Orders: Rhode Island (Heritage Books, 2001) and Wives, Slaves and Servant Girls (Westholme, 2016). Don works as an engineering consultant in Rhode Island, and also writes for several well-known syndicated and freelance cartoonists. He can be contacted at dhagist@cox.net.