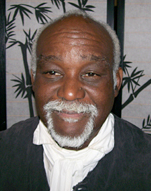 With enlistments declining, what could be done to boost the ranks of the Continental Army?   General James Mitchell Varnum had an intriguing idea, why not enlist African Americans into the fight for independence.

Join us on Monday, September 21st as we welcome back our friend Joe Becton as he talks about the 1st Rhode Island Regiment and the struggles of the African American soldiers during the American Revolutionary War.

Joe Becton is a teacher, philosopher, counselor, historian, musician, interpreter, husband, father, and grandfather.  He holds a bachelor’s degree in History Education from the University of West Florida.  Joe has been a Marine, Park Ranger Supervisor at Independence Hall, counselor, teacher, and Director of Visitor Services at Fort Mifflin.  Joe is also the leader of the Cobalt Blues Band and can be seen at many festivals in the area whether playing music or giving lectures.  Please visit his site at http://www.jobecton.com/index.htm

George Washington neither approved or disapproved of the idea of enlisting slaves and sent it to the Rhode Island Assembly to approve which they did on February 14th, 1778.  Learn about America’s first regiment that had several companies of African American soldiers, The 1st Rhode Island Regiment

The 1st Rhode Island Regiment was a Continental Army regiment from Rhode Island.  Like most regiments of the Continental Army, the unit went through several incarnations and name changes. It became well known as the “Black Regiment” because, for a time, it had several companies of African American soldiers. It is regarded as the first African-American military regiment, despite the fact that its ranks were not exclusively African-American.

A total of 88 slaves enlisted in the regiment over the next four months, as well as some free African American men. The regiment eventually totaled about 225 men; probably fewer than 140 of these were African Americans. The 1st Rhode Island Regiment became the only regiment of the Continental Army to have segregated companies of black soldiers. (Other regiments that allowed black men to enlist were integrated.) The enlistment of slaves had been controversial, and after June 1778, no more non-white men were enlisted. The unit continued to be known as the “Black Regiment” even though only white men were thereafter recruited into the regiment to replace losses, a process which eventually made the regiment an integrated unit.

Under Colonel Greene, the regiment fought in the Battle of Rhode Island in August 1778. The regiment played a fairly minor—but praised—role in the battle, suffering three killed, nine wounded, and eleven missing.

Like most of the Main Army, the regiment saw little action over the next few years, since the focus of the war had shifted to the south. In 1781, Greene and several of his black soldiers were killed in a skirmish with Loyalists. Greene’s body was mutilated by the Loyalists, apparently as punishment for having led black soldiers against them.