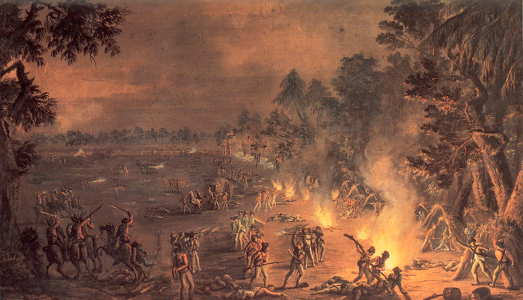 The Battle of Paoli is the 9th deadliest battle in the American Revolutionary War. In fact there are three battles mentioned here that make up the Philadelphia Campaign of 1777.

One of the most comprehensive sources of casualty figures is Howard Peckham’s The Toll of Independence (The University of Chicago Press, 1974). Despite its age and shortage of British totals, historians still often point to this volume for American loss data.

Based on records for 1,331 military and 218 naval engagements, Peckham concludes that 7,174 were killed and 8,241 were wounded during the eight-year war.

Beyond these summaries, Peckham’s book is loaded with figures that would make any statistician drool and, of course, many historians debate.  With such a resource at my fingertips, I thought it would be interesting to list the Revolutionary War’s 25 deadliest battles, looking at engagements both on land and at sea. After all, the Revolutionary War is second only to the Civil War in deaths relative to population. This list is based exclusively on Peckham’s figures of Americans killed and wounded, which are totaled in (parentheses) and sorted in order of most killed and wounded to least. Then, for perspective, I included British killed and wounded totals from multiple sources, which are in {braces} and cited to their respective sources.

Based on Peckham’s casualty figures:

Of course, this is all based on a numbers game and new casualty sources are regularly added and subtracted. As Peckham summarized, “If we cannot offer the final word on casualties of the American Revolution, we hope that we can at least elevate the discussion of those losses by the addition of figures that have heretofore been unknown or unavailable.”

EDITOR NOTE: To focus on the “deadliest battles,” casualties were limited to killed and wounded, but missing and captured could increase the totals or raise additional questions. As demonstrated in the introduction, war casualty figures during the Revolutionary War were often used as propaganda. Casualty data continues to be disputed and debated today. As such, we welcome all arguments against Peckham’s American casualty numbers to unfold in the comments below.

Read the full article below…